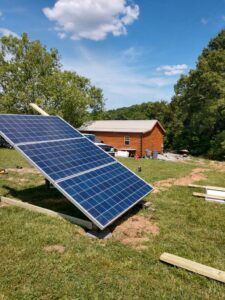 Last year I was blessed to find and join a group of self proclaimed “do-ers” who find the time to take turns going to other’s homes and properties in order to tag team various installations and home improvement efforts. Usually it’s related to homesteading efforts but the approach applies across all kinds of projects.

I’ve always had a bit of the “go it alone” type of demeanor and this has been to my detriment more than once. I hate to ask for help and I’m slowly learning that it’s okay to admit when I just don’t know about something and need instruction.

But since I’ve been welcomed into this community, my attitude has shifted. I’ve always enjoyed working in teams, but to request help was foreign. This has had to change since we’ve taken on the off grid, small home living lifestyle. There’s been a lot to figure out and while YouTube has it’s uses, getting the solar planned and installed was going to require expert help.

One of the members of the community, Shawn Mills, has an off grid property and has made solar consulting and installations one of his side businesses. (www.hackmysolar.com) I asked him if he’d be interested in performing an assessment and leading me through the process of procuring the components.

With enthusiasm, he agreed and we got the ball rolling. Finally, after months of awaiting the cabin to be delivered and then for reasonable weather, we got the crew up here in late May.

We were blessed with a beautiful day and about 10 people ready to get rolling. 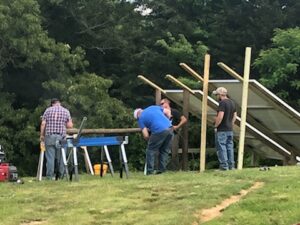 Our electrician had already wired the house and installed the breaker panel. We had a trench ready for the wiring that travelled from the array to the combiner box outside the house.

We tackled the somewhat worrisome job first: Getting three 150 pound lithium ion batteries into the loft space and into the battery box. Shawn and Bryan team lifted one battery at a time to shoulder height and Myles and I, positioned in the loft, grabbed it from them. Fortunately the batteries come equipped with two carrying handles for maneuvering. We had to place them horizontally into the box, which was mostly a case of wrestling them onto our laps then boosting them into place. There’s not enough headspace in the loft to stand up so everything was done scooting or crawling around. Awkward, but we made it happen. We secured the batteries, then the inverter.

Then it was time to go outside. We had ended up changing the location of the array due to late day shading. With a marker set for 190 degrees (and as close to due south as we could manage) we began assembling the mounts for the panels. This took some creative work arounds as your author here had failed to order enough boxes of the mounting brackets.

A fine gentleman who I had never met before that day turned out to be the perfect addition to the team. Marlin, who is a tradesman and clearly a polymath, took the lead on constructing the mounts and instructing others with patience, kindness and a great sense of humor and cordiality.

By now we had split into two groups, the outside crew prepping the panels and mounts and the inside crew completing the connections from the breaker box to the panels.

We had made sure to keep everyone supplied with snacks and refreshments and I had to note that despite having to rethink certain plans and considering the stress involved with coordinating a large project, everything seemed to go well and spirits were positive.

I should add that while the work took place on Saturday, Bryan and Shawn arrived Friday evening and helped me until 10:30 at night completing some plumbing and helping to get the on demand propane water heater online. While we weren’t fully successful, I couldn’t be more grateful for their assistance. I had been overwhelmed for weeks, trying to coordinate a busy landscaping schedule with the need to get multiple home projects completed. You know, like running water.

By around 6 pm, we had the major work done and the panels were supplying power to the house and charging the battery bank. It was time for food, rest and fellowship. Despite being exhausted and a little overwhelmed, I did my best to personally thank everyone who had taken their day to assist with this project. Most people had driven at least a few hours to be here. A handful of us stayed up late, swapping stories over the campfire.

Mainly I’m highlighting here what happens when folks voluntarily come together to achieve an objective. We agree to provide mutual aid to one another. When the next event is planned, I’m going to be there to do my part. This kind of exchange is a part of natural human interaction. But for a few generations now, most of us have been trained to call a stranger when a job needs to be completed. Coming out of a time where gathering has been actively discouraged, I am pointing out that we need each other. We cannot achieve everything via Amazon delivery and hiring a guy. We’re hardwired to coordinate our efforts.

I can’t express enough my appreciation for everyone who was there that day. It really shows who true friends are.

So I’d encourage you to work on forming your own groups. Plan for just a small project and see how it goes. Some folks believe we’re heading towards a future that’s full of ever more complex technology that’ll solve all of our problems. I don’t believe that to be the case (at least not everywhere) so I’d want to have on hand the ability to call on and to provide human minds, sweat and humor to the task. Either way, I’ve never had a better sense of satisfaction as when I’ve worked with a team to achieve an objective while also building kinship and trust.

Now, onto the next…