Skip to content
Fermenting Feed for Your Friends
October 27, 2021 by Kerry Brown

A couple of years ago, a farmer friend who was working on implementing permaculture practices on her land that houses ducks, chickens, geese and goats introduced me to a concept that I’d not heard of before: fermenting feed. 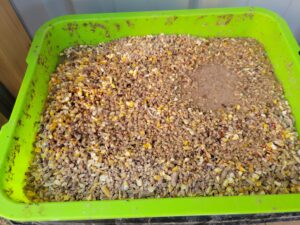 She showed me a system of food grade buckets that she kept in rotation. It was simple: she doled enough commercial feed into a bucket for each set of animals. She then added just enough water to cover the feed then lightly capped the bucket. After 24 hours, that feed was ready to be consumed and the process was repeated for the next day.

At the time, I was just keeping chickens, but I put the system into place to see how it worked. In my case, I added a handful of scratch grains in addition to the regular feed. 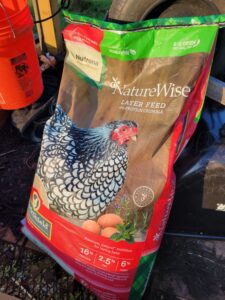 First, it cut my feed costs down considerably. The birds didn’t eat as much of the fermented food, so I was able to reduce the amount of feed they needed. It appears this is because the fermentation process makes the nutrients more bioavailable so fewer calories are desired. I judged this by the birds’ behavior at feeding time. While before they would peck at the feed with disinterest, mining it for nutrients but being far more interested in bugs, leaf matter and appropriate table scraps, once the food was fermented, they literally dug in with fervor. Their feather health improved, as well as their general demeanor. In other words, the hens were less competitive and easier going than previously.

In this type of fermentation, we’re just relying on the yeast already present in the air and within the food to start the fermentation process. When the feed is ready, it should smell slightly sour and have some bubbling, but it should not smell rank or foul like raw waste or rotten food. There’s a brief window between these two scenarios, which is why you only want to ferment enough for that day’s feeding, then have another clean bucket or vessel ready to go for the following day. If in doubt, compost anything undesirable and try again. No need to risk sick animals over a few cents.

At the urban homestead where I had a spare fridge to dedicate to animal food and homestead uses, I could ferment and store enough for about three days. Now on the off grid, pared down homestead, I just do enough in a tray at room temperature for a single serving.

When I’m able to find it, the Nutrena brand seems to do especially well. I’m on the hunt for soy free feed but I haven’t had success yet. Ideally we’ll find a way to grow our own animal fodder as we implement more systems here, but in the meantime, fermenting is my preference.

So I suggest giving it a shot. It’s easy enough to add in to the morning animal chores, your feed bills will decrease and I’ve yet to meet an animal that didn’t show a preference for it. From my observation, the chicken droppings are less offensive and compost more quickly. Be warned though, your animals will come to expect it, and if you skip it for a day due to being busy or out of town, they’re going to give you the side eye.

I hope everyone is having a fantastic fall season. There’s more content on the way as we are wrapping up our first year of observation and interaction with the land. Be well and email strongrootsresources@gmail.com at any time if we can help you with your homestead and resilience journey!