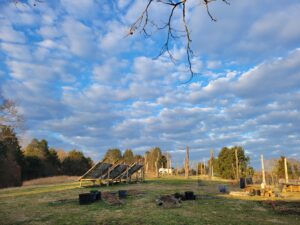 I hope everyone has been enjoying their summer and splitting the difference between getting stuff done and also enjoying life! It’s even better when those two things come together under one umbrella.

This second half of August has been far more mild than what I recall last year, and I’m totally fine with that. I’ve started getting that inkling of fall sensations in the cooler, clear mornings.

Here on the farm we’ve been wrangling 11 turkeys. They’re around four months old now and solidly in the “mouthy teenager” stage. It’s looking like we’ll have more males than are necessary, so they will find their way into the freezer and the rest will kept as breeding stock. They’re all heritage breeds: bourbon red, blue slate and Narragansett. Turkeys have a lot of personality: they like human interaction and can even be herded. We were allowing them to range the yard for a while, but they went rather far one day, pillaged my brother’s garden and so they’re now in their enclosure that’s being adapted to have a moveable solar electric fence “chute” that allows them on fresh sections of land as needed. I also bring them a variety of forage each day: comfrey leaves, various trimmings, amaranth plants, poplar leaves and whatever else is available.

We also picked up 8 laying hens that are in a tractor and get moved daily. These are the most chill chickens I’ve ever had. They hardly make a sound, even after laying an egg. We picked them up from some folks who were downsizing. They were in a bit of rough shape from a persistent rooster but a month later, their back feathers are just about filled back in. They’re also molting right now, so they’re not laying much. We’re in the planning stage of a rotational chicken paddock. It will also contain a chicken-turned compost pile with in it. We have most materials, it’s just a matter of setting aside the day to put it all together.

The gardens have done really well overall, especially the site that was prepared by the students of a Permaculture Design Course in April. As we’ve moved towards a more meat-centric diet, much of the produce ended up being shared or given to the livestock. I’ll never not want to plant gardens, so I’ll just alter my plans towards planting what the livestock thrive on, as well as what’s tradeable within my community. I’m continuing with the food forest build. Currently it contains blueberry, apple, peach, pear, mulberry, raspberry and comfrey. I’m just adding things are cuttings take root or a find good deals on potted or bareroot plants.

In terms of community, we’ve continued to make great strides in that area. Between the local and middle Tennessee Freedom Cells, the Building Community Resilience group in Jefferson County, the Get Sh*t Done Crew (from all over), we’ve been building really solid, reassuring relationships. I’ve been able to get out to places to help with storm clean up, fencing, building projects and we have had folks out here for a small pond build and firewood processing.

The first Surplus Swap and Social went well and we’ll continue that on the first Sunday of each month. Email me at strongrootsresources@gmail.com if you’ve like to come out to the next one: September 4th, from 1 to 5 pm in West Knox County. Bring things to swap if you wish, or just to connect with others.

The next event on my radar is the Self Reliance Festival in Camden, TN on the first weekend in October. Check out the website for the full line up. It looks amazing and I’m really looking forward to it. www.selfreliancefestival.com

I’m not presenting at this event, instead I’m going to be manning the Community Connections tent along with my associate Dawn, as we work together to get folks connected in real time with each other. We’ll be offering cards for folks to fill out with their contact info, including skills/goods/businesses they can offer and what they’re looking for in return. The cards will be filed by State/County and folks in those areas can get a picture of the relevant cards and have a starting point for making that connection That info will also eventually make it into a database to be shared as well.

I’ve found that Self Reliance Festival brings a wide variety of folks in, but the common denominator is that everyone wants to get stuff done. None of us can make this work alone and we’re all feeling tugged in a dozen different directions. Forming small, decentralized and trustworthy groups, based upon actually accomplishing projects together, works, every time.

For fall, we’re looking at holding a basic carpentry class. This would be for those who wants to become confident running battery/corded hand tools like impact drivers, drills, circular saws and understanding the basics of using a level and a square. More to come on that as the better half and I put those plans together.

Please reach out if I can assist you with anything! I continue to offer homestead and land evaluation and consulting services and if you’re within a couple of hours of Knoxville, I can do installations as well: raised beds, tree planting, garden bed design, mulching, property care and invasive management and more.